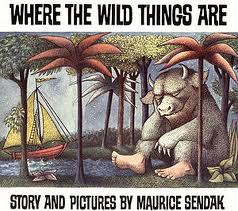 I have discovered more from reading Maurice Sendak’s books as a parent than I ever did as a young child.  Where the Wild Things Are forces me to remember all of the times where my children have disappeared into a fantasy world only to completely lose judgment.   At eight, my eldest played T-Rex with such sublimation of character that he bit a young herbivore, ahem, eight year old girl.  His roots of mischief were revealed much earlier in life, though, when he and his then two year old brother constructed a detailed network of train tracks – with shampoo, hair gel and nail polish – all over the wall, cabinets and tiled floor of our newly added bathroom.  Sendak’s tender illustrations of the Little Bear series have helped me s

ee deeply into my six year old daughter’s thoughts.  There is not one moment of personification; every stuffed animal, every doll is very real in the mind of a little girl.  As my little girl applies a bandage to care for her doll, I can see Emily, Little Bear’s friend, putting her head down to her doll Lucy and listening for a small voice.  I hope to remember to ask my children, when they become parents, what they see in Sendak’s pages.